Bumblebees and Butterflies 2019-20
Rowan wanted to make a Forky today, unfortunately we didn't have any forks. This wasn't a problem for Rowan who used his problem solving skills to make his very own Forky from the materials available in the creative area. I think this a much better Forky then a plastic one, better for the environment too!
'I want a Forky'
Cassie was very proud of her family portrait, and so she should be.
'This is my family'
Aidan was very keen to take my picture today, when i protested he told me 'don't worry, I can take a selfie'
"I can take a selfie"
What better way to celebrate the return of the Premier League then with a game of football ourselves.
We love Dough Disco and developing our fine motor skills. Today we enjoyed dough disco with a twist, instead of Miss B deciding on what to do with the dough each child gave the instruction. It was amazing, we made hot dogs, doughnuts, pancakes, a ball as well as pinching it, pulling it and poking it!
Dough Disco time with Elsa, don't let it go!
We are now the very proud Author and Illustrator of our very own shape books. We stuck our shapes into our book, named them and then counted their sides and edges which are also called their properties. Finally we used paint and stampers to show how many sides and edges they have.
It is great being back at Nursery but we are still missing our friends in the other Bubble, so we have made hand prints to go on the window so that we can still touch them.
We have been reading the story 'Jack and the Beanstalk' Kerim has been very busy at home and getting involved with the remote learning to grow his own bean or beanstalk - we don't know what it will be yet! Kerim has promised to keep us updated on its progress so watch this space. He also made his very own beanstalk picture after following instruction from our live Zoom sessions. Go Kerim, tou busy bean!
Kerim is growing his very own Beanstalk
Is it a plane, is it a bird, no its a Beanstalk!
We have been very creative this week, sticking to our theme of all things bugs and insects. In Group A a giant Ladybird was made using a cotton reel for decoration and its spots while other in Group B, Rowan used his imagination to make a Spider ladybird that eats people.
Rowan made a spider ladybird that eats people
Group A made a giant Ladybird
We  have been reading the story 'What The Ladybird Heard' and finding out about bugs and insects. All week we have been going on bug hunts and trying to find some bugs but due to the extremely hot and beautiful weather they were all hiding. We were very disappointed and sad until Friday! When both bubble A and Bubble B were lucky enough to find some bug visitors in the garden. Bubble A found a pretty Ladybird while Bubble B found an ant. Still a bug is a bug and both were very welcome and gratefully found.
We're going on a bug hunt....
We found some small ones
At the start of the week Aidan was very nervous about the climbing frame, wanting support throughout his adventure along it. With encouragement and self-belief by Wednesday Aidan was exclaiming "I can do it Miss B, watch me" Well done Aidan!
"I can do it"

We have been developing our cutting skills in Nursery this week, Cyra was able to name some of the 2D shapes before using the scissors to carefully cut them out. When she was happy with them, she then added detail to create different pictures relevant to their shapes, e.g. a face to the circle and vegetables to the triangle. "It's a pizza" she said holding up for her friends to see. 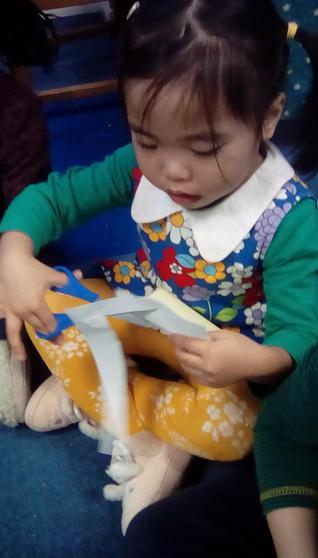 Lorik and Ellie have been developing their early reading skills by enjoying a book in our new Dinosaur reading den. 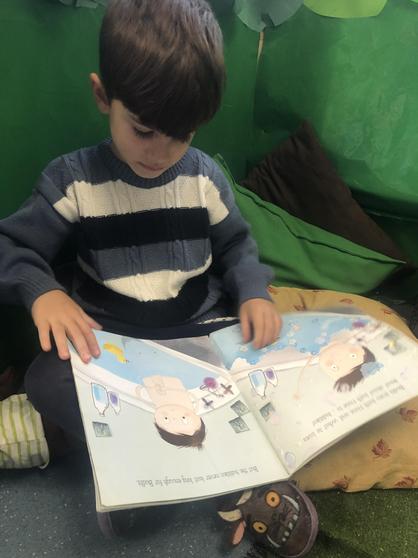 They both independently chose a book and looked at the illustration in them, talking about what they thought might be happening and relating it to their own experiences. 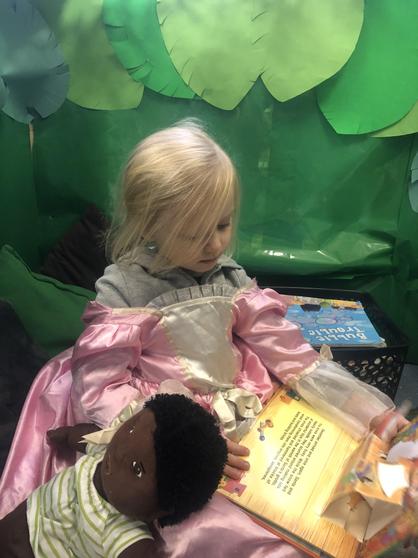 "I like reading a story to my new friend before he goes sleep" Ellie told us.