This half term our writing and project have been completely interlinked. First, we became experts in newspapers. Then, after developing in-depth knowledge of the first Moon, we wrote about this historical moment as journalists. After that, we worked in groups to become experts in the Sun or one of the planets, and then used this to write non-chronological reports. During this project we have also been developing our working scientifically skills such as to investigate the link between shadows and the Earth’s rotation. All of this learning has informed our final project end outcome: a model of the solar system. We have even been using the Solar System to support our French learning of phrases such as far/near/next/last as well as consolidating our use of descriptive language such as colours.

Our text this half term in Guided Reading has been Kensuke’s Kingdom by Michael Morpurgo. We have enjoyed unpicking and analysing the fantastic vocabulary as well as reflecting on whether or not we would like to undertake an adventure such as Michael’s with our own families!

In Maths this half term we have been consolidating lots of learning from earlier in the year as we start to get ready for Y6 - such as dividing, multiplying and applying this to solve problems. We constructed our own cuboid robots and then, in order to find out how much foil we would need to cover them, we calculated their surface areas. Then, we calculated their volume in order to find out how much fuel it would take to fill them. We’ve been measuring lots of items in and out of the classroom and have really improved at making sensible estimates such as how much liquid a container can hold. This led on to practising converting between different units of measure. Finally, we have been developing the time-keeping skills we will need as we become increasingly more independent – such as walking home alone in Y6, getting to the right lesson at the right time in Y7. We have even started being able to understand complex timetables so we are ready for an adventure like Michael takes in Kensuke’s Kingdom - if we get the chance.

In RE we have learnt about the 5 pillars of Islam and how Muslims around the world perform them accordingly. Islam is an Arabic word meaning submission and obedience. It comes from a word meaning peace. Like Christians and Jews, Muslims are monotheistic which means they only believe in one God, who they call Allah.

We had a great time at the picnic for the Queen’s Jubilee. 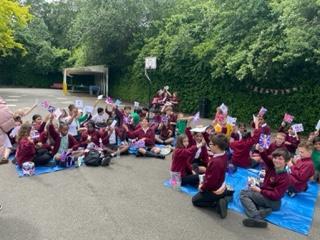 What a great start to 2022 for Year 5 pupils! In English we learnt about myths, legends and folktales from other cultures through exploring the book “Seasons of Splendour” by Madhur Jaffrey. We thoroughly enjoyed this book as it took us on a journey of rich and colourful folklores. These stories, told by parents to their children for many generations, make a rich and dazzling collection of mythological tales drawn from a great heritage of Hindi epics as well as a host of other magical and spectacular creatures. We loved reading every word!

In Maths, we practised and consolidated techniques to work out fractions of amounts and percentages. We also become experts in telling time and calculating durations in timetables because knowing how to tell time is very important skill. We understood it can help us to work out whether we are running late or have plenty of time to spare. Such skills can also help us to catch a train, bus, or plane on time, and allows us to know if we are going to make it to a celebration or not.

Project Based Learning (PBL) took us on a learning journey across the globe. We used our Geography skills to become experts in countries from the Western to Eastern Hemisphere. We choose our own countries, worked out longitudes and latitudes as well as their physical and human features. We learnt some super exciting things that we did not know before. One class shared their knowledge through a holiday cruise video around the Eastern hemisphere while the other class will share their expertise using a video file.

Another term just flew by and we didn’t even notice. In Year 5 we have become young documentarians by producing a documentary on The Maya Civilisation.  We are now experts in how Maya people created the calendar, the writing and the first signs of Maths. Gods and Goddesses and their first ball games have also been studied in detail to better understand how Maya people kept themselves entertained.

In English, Year 5 have studied “The Adventure of Odysseus”: we analysed the text, learnt new vocabulary and differentiated between the features of Myths and Legends. We wrote our own play scripts about how Odysseus and his team successfully (in some ways) escaped the vengeful Cyclops.

In Maths, Year 5 have covered subjects like; converting lengths, intervals when reading scales, adding, subtracting, multiplying and dividing fractions and mixed numbers and shapes. In our Finance Friday sessions we looked at working within a budget, how adverts persuade us to spend our money and what items are better value for money.

We can’t wait to come back and have another blast of a term!

Keep a look out for the Documentary, coming soon to this page!

Autumn 1
Year 5 have had an incredibly busy start to the year. It has been amazing to see how quickly the new Year 5’s have settled  into Yellow Quad. The children have returned to school with a renewed energy and settled in beautifully. They have adapted to the new rules, demonstrating resilience, responsibility, and independence in their learning.
During Autumn 1, we kicked off the year with our ‘We Are Living and Growing’ project. This half term allowed us to become experts in all things to do with animals, life cycles and habitats. We had to carry out extensive research (the kind that only renowned scientists do) on our chosen habitat in order to create our very own habitat Biomes. That’s correct, HABITAT BIOMES! We have been blown away by how amazing the Biomes look (Just take a look at the pictures below). Additionally, Year 5 have also written detailed fact files about their chosen habitats and these will be displayed in the school library and in the Nursery, so that we can share our knowledge with children and adults around the school.
We've enjoyed delving deep into our English learning which has focused around the book 'Skellig'. We have focused on different sentence types (simple, compound, and complex), personification, metaphors and hyperboles. We have written a range of detailed descriptions, diary entries, letters, and even an alternative ending for our class book.
Maths learning has been very successful! We've been completing our times table challenges every Friday and have become confident in using the four operations, (using our place value knowledge), identifying and measuring angles and most of all, we have worked so hard on solving problems involving fractions (comparing and ordering, equivalent fractions, mixed numbers and improper fractions, adding, subtracting, multiplying and dividing fractions).
The children have really pushed themselves this term and have done an amazing job! We are super proud of them. ​ 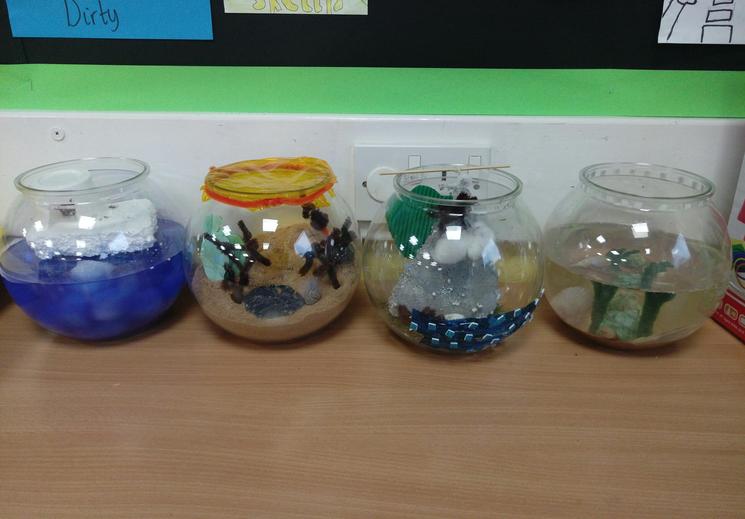